We drive to the archaeological park and will start the tour to these destination as below:

Bayon (the original name is Jayagiri “Victory Mountain”) is a well-known and richly decorated Khmer temple at Angkor in Cambodia. Built in the late 12th century as the official state temple of the Mahayana Buddhist King Jayavarman VII, it stands at the centre of Jayavarman’s capital. The similarity of the 216 gigantic faces on the temple’s tower to other statues of the king has led many scholars to the conclusion that the faces are representations of Jayavarman VII. Others have said that faces belong to the bodhisattva of compassion called Avalokitesvara or Lokesvara.

Break time for lunch near the temple.

The temple is a representation of Mount Meru, the home of the gods: the central quincunx of towers symbolizes the five peaks of the mountain, and the walls and moat symbolize the surrounding mountain ranges and ocean. One of the first Western visitor to the temple was Anto’nio da Madalena, a Portuguese friar who visited in 1586.

Morning breakfast and check-out from the hotel. After that we will drive to the south to the lake for floating village. We will visit the biggest fresh water lake in South-East Asia called Tonle Sap Lake in the in the morning. Where we will take a traditional wooden motorboat on a tour along the lake to visit the local floating village, fishing village (get experiences with local people’s life activities at the lake which is completely different), flooded forest and the big open of the lake like the sea.

Finish tour day 2 and transter to airport for departure. 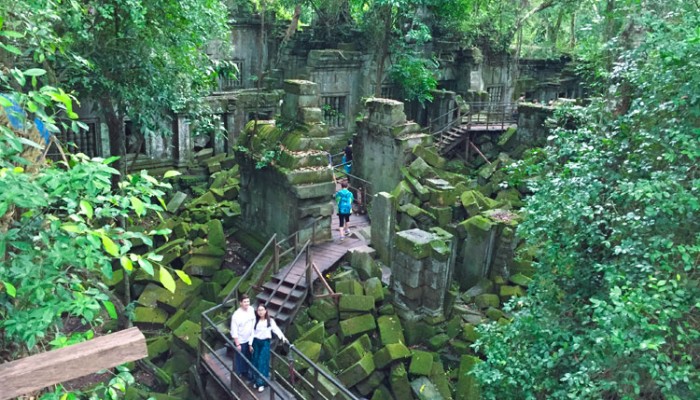 © 2023 Cambodia Journey Wisdom. All Rights Reserved. Developed by: IT Khmer